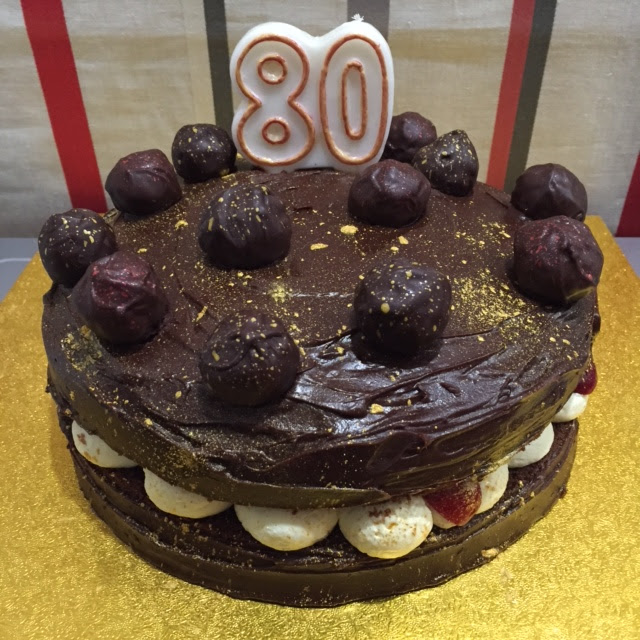 I’ve dubbed this decadent creation, “Chocolate Mountain Cake” in honour of my father-in-law Jovan, who celebrated his 80th birthday today. I set out to decorate a classic chocolate pound cake (recipe published previously) in a textured ganache finish and filled it with his favourite fruit – plump cherries – and a rich mascarpone cream. My inspiration came from the rocky and wooded surroundings of my father-in-laws birthplace. 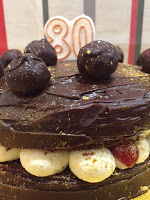 Jovan was born in a coastal village nestled in the mountains of Montenegro. According to tales told by his relatives and friends, Jovan was actually born outdoors, on a mountainside at the start of winter. Imagine that! Bundled into his mother’s apron as she made her way back to the house in the brisk morning air, the tiny infant must have had a truly tenacious spirit to survive in such circumstances. I think Jovan’s tenacity and positive outlook, combined with his kindness and devotion to family has served him well and helped forge a wonderful life in Australia.

It was joyful, satisfying feeling to have all the family gathered around celebrating Jovan’s monumental milestone – 80 years of age! We enjoyed a feast of home made delights, thoughtfully prepared by various family members and centred around Jovan’s favourite dishes and ingredients. These included sweet, dense ox heart tomatoes that reminded Jovan of the tomatoes he ate as a young man in the village. I drizzled these with an robust extra virgin olive oil from Lomondo www.lomondo.com.au, a family owned olive grove just outside of Mudgee NSW. I urge you to pick up a bottle or more because it is utterly delicious, with a fresh herbaceous flavour. My three year old was drinking the contents of his dipping bowl he loved it so much! 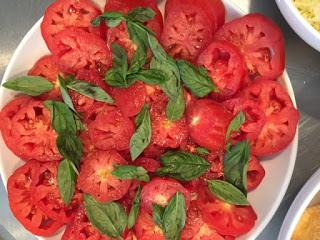 An ocean trout filleted to reveal two whole sides (1.750 grams a side), was baked briefly in a hot oven for 15 minutes at 200 degrees fan forced, and then topped with sautéed leeks and lemon (another of Jovan’s top veggies). It was a hit with kids and adults alike! An excellent dish for a large gathering especially when the guest of honour enjoys seafood. 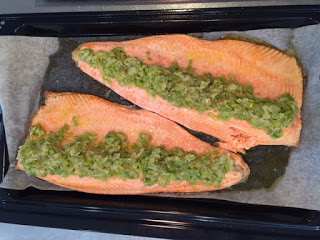 Who would think potatoes could be so tasty! Jovan adores spuds as they too were a staple when he was growing up. These were thinly sliced, doused in Lomondo olive oil, sea salt and fresh rosemary and baked in a hot oven for 30 minutes util they became crisp around the edges. I call this dish baked potato galette, but the kids just call it “chips”!!

My sister-in-law Danijela made several salads including the crisp cabbage salad simply dressed with olive oil and vinegar. It is a staple in Montenegro and complimented the trout and buttery beef eye fillet.

Baked ricotta cheesecake by my other sister-in-law Lily, was a beautiful, light addition to the dessert buffet – it is a dessert that doesn’t feel like you are eating dessert… which of course meant everyone then had room for an additional slice of Lily’s sticky caramel slice pictured.

It is important to keep in mind that when organising a special occasion, it needs to be tailored to the guest of honour. My father-in-law adores being surrounded by his loved ones; he feels most comfortable in a warm, homely environment and adores home cooked food. Although a restaurant provides an elegant setting with a superb, expertly prepared menu, we decided it would be best to host his 80th at home, because that is what he would want. We did throw in a surprise cruise on picturesque Sydney Harbour and my daughter Eva made a movie of Jovan’s life from a compilation of family photos and favourite songs. The combination of everyone’s efforts made Jovan so happy, that he beamed all day long.